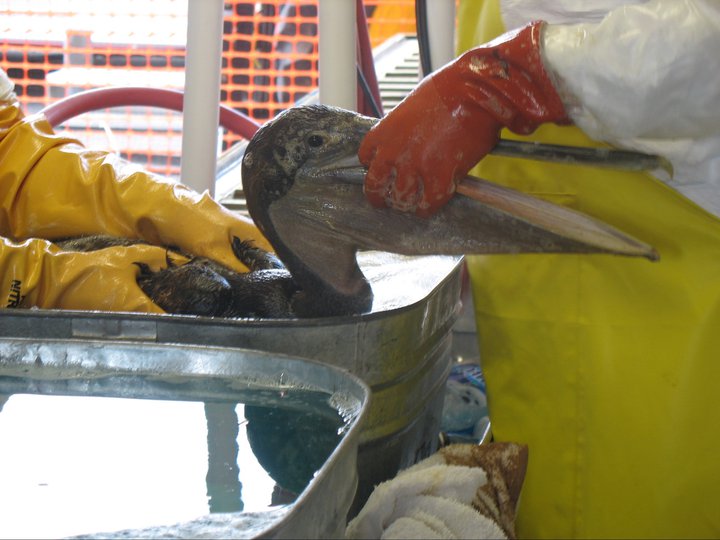 Am I doing the right thing?

Nine years later, I know this is the career I was meant to have.

We have a pretty awesome mission statement at the U.S. Fish and Wildlife Service:

The mission of the U.S. Fish and Wildlife Service is working with others to conserve, protect, and enhance fish, wildlife, plants, and their habitats for the continuing benefit of the American people.

What does that mean for me as a communicator?

In television news, we wrote our scripts to appeal to the general public.  We didn’t necessarily have a target audience.  The main rule of thumb was to write as simply as possible so that your great-grandmother could understand the story being told.

I went to work at the U.S. Fish and Wildlife Service with that idea in mind.  But I’ve learned so much about communication since the day I arrived nine years ago.

I knew going into public relations that story-telling would still be a major part of my job.  But communicating goes far beyond writing a story and posting it on a website.  You could be the most prolific writer on the planet.  But if you have no measurable objectives, you may want to rethink your strategy.

One of my FAVORITE quotes is from journalist Sidney J. Harris, and it’s pretty much my mantra.

As a communicator for the Service, what exactly did I want to communicate, and to whom?  Well…

With these ideas in mind, it didn’t take me long to learn there’s no such thing as the general public.  I’ll say it again.

There’s no such thing as the general public.

What the heck does that even mean???

It means any time I communicate, no matter which  vehicle I use, I have to communicate in a way which will resonate with the change makers.  Who are the stakeholders that can support our mission?  Environmentalists, scientists, biologists, landowners, developers, lawmakers (and yes, the media)….. That’s who my audience is.  There’s nothing general about it.

Speaking for the voiceless

Last week, our law enforcement officer sent me the most heartbreaking photo.  Someone reported a dead brown pelican whose feet and legs were bound with electrical tape.  Not only is this a sickening thing to do.  But it’s also a violation of the Migratory Bird Treaty Act.  The picture is below.  Be forewarned…it’s graphic and disgusting.

Wow.  It’s hard to even fathom that someone could be so cruel.  Whomever did this is truly a sociopath.

This tortured pelican had no voice….no one to speak for him.  But with the help of a concerned nature lover who reported the crime, this little guy’s story WOULD be heard.

I thought about sending out a press release, and asking media to cover the story so we could get leads.  But I wanted to get the word out NOW.  It takes time to write a press release, get it approved, then send it out.  Once we send out the release, it may take a while before the assignment editor actually reads it.  Who has time for that?

We have more than 4,000 followers on our Facebook page, and these fans have a stake in wildlife.  They already care enough to follow our page.  These are the folks with whom I wanted to reach.  So, I chose a social media platform instead of a press release. 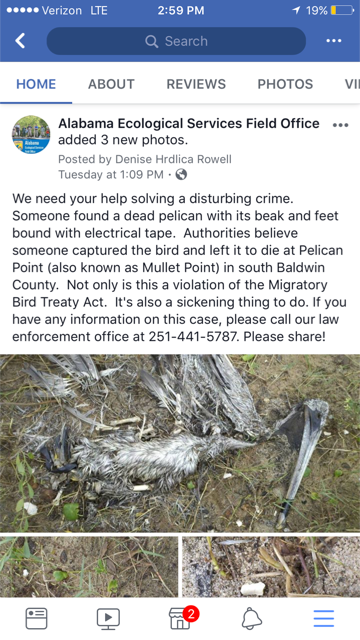 The post was shared nearly 600 times, and more than 56, 000 people were reached.  The media caught wind of it, and a television station also covered the story. (No press release necessary!) We can’t comment on an open investigation, but I’m hoping out of the 56,000+ people, someone will know SOMETHING.

The one positive thing that came out of this treacherous story was seeing how so many people rallied around this bird.  People are angry.  They want justice, and they want it now.  It reminded me that many people in this world have a passionate heart for wildlife.  That dedication is why I come to work every day.

Speaking for wildlife and the people who love it is an absolute privilege.  I want to keep learning and growing so I can better serve the plants, animals and fish who depend on us to be their voice and tell their story.