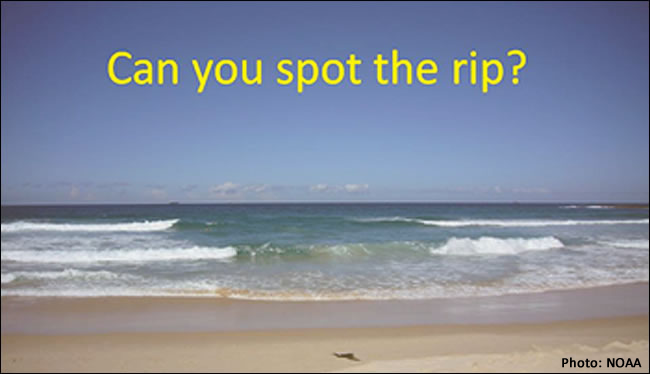 In Florida and Alabama, we are blessed with some of the most beautiful beaches in the world.  Thousands of tourists flock here each year to enjoy this little piece of paradise.  Families come to make memories, build sand castles, play a round of cornhole, collect seashells and splash in the salty, turquoise water.

But we have a crisis of epic proportions on our hands.

Lives are being shattered…..families destroyed.  Instead of making cherished memories, loved ones are going home in body bags.  People are DYING because they don’t know the strength of the currents within the Gulf of Mexico.  They don’t understand that going for a swim when waters are rough can be a gamble for their lives.  They don’t realize that the channel of water that’s pulling them under is stronger than they will ever be.  They will never out-swim it, even if they are a strong swimmer.  Most tourists have never even heard the words rip current.

Rip currents are strong currents of water floating outward from the beach into the surf zone.  Believe it or not, they are actually very easy to escape if you know how to do it.  All you have to do is swim parallel to the shoreline, and you will escape the tight grip of the current. 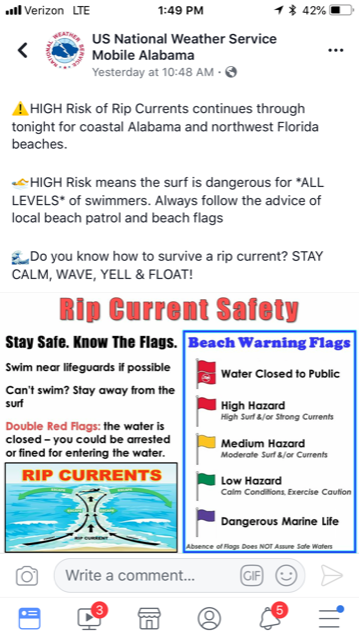 During a vacation in Destin, I found myself caught in a rip current.  I didn’t realize it right away.  I was trying so hard to get back to the shore.  I swam with all of my might, and got nowhere.  I didn’t quite understand why I wasn’t making progress.  I am a great swimmer.  But no matter how hard I tried, I just couldn’t get back to the beach.  I started getting tired, out-of-breath and my panic was on overdrive.

Then, my scuba training kicked in; I suddenly realized I was in a rip current.

I got on my back to float (because I was so exhausted at this point), and I paddled to the side of the shoreline instead of to the shoreline.  Thirty seconds later, I was back on the beach….exhausted, shaken and thankful to be alive.

I will never forget that day.

If it weren’t for my scuba training, I would have never known what was happening.  I may have never made it out of the water.  I would never get married, or have my two little red-headed beauties.

On Dauphin Island, a family from Taiwan is going through unspeakable grief.  A 47 year-old father and 17 year-old son disappeared while going for a swim off Dauphin Island.  Both bodies have been recovered. 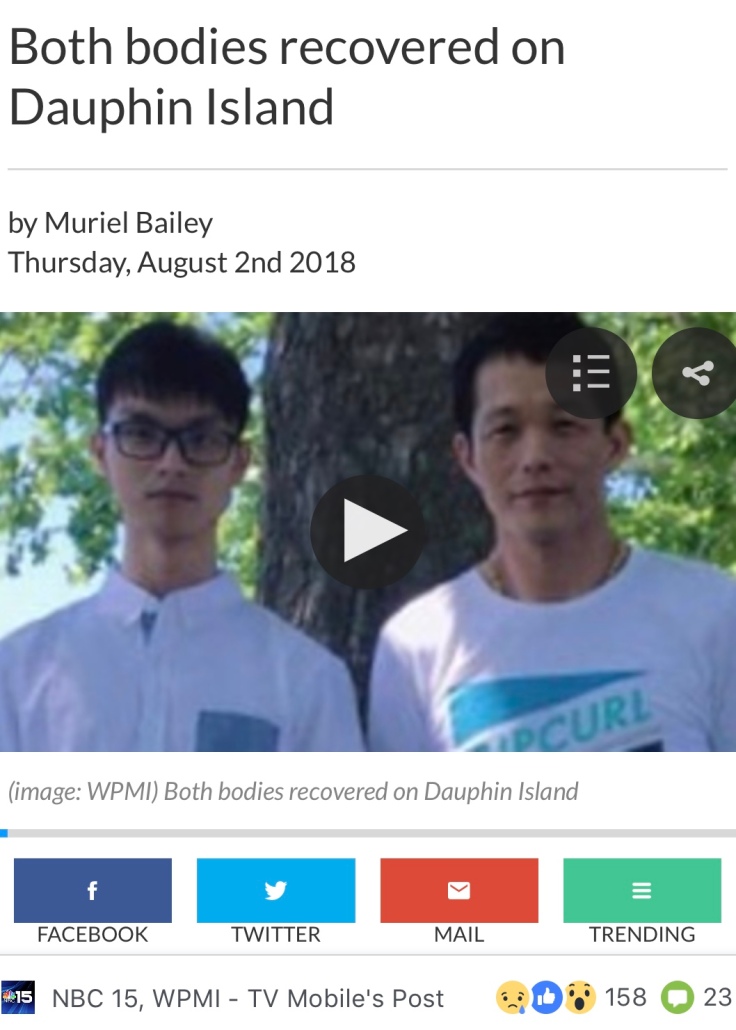 I’m sure when this family woke up this morning, they anticipated an awesome day at the beach.  The rain finally cleared, and there is a nice breeze outside.  I’m sure this father and son thought a dip in the water would be refreshing.  They had no idea this would be the end for them.  They had no clue that deadly rip currents were lurking in the water.

According to the National Weather Service, 53 people have died this year from either being caught in a rip current or high surf.

Excuse my language, but this is bullshit!

Beach towns have a moral OBLIGATION to do a better job educating and raising awareness on this deadly phenomenon.  I’ll admit, I don’t know what kind of rip current outreach is happening on the Gulf Coast.  I haven’t done my research.  But obviously, whatever programs they have in place aren’t working.

According to NBC 15 News, at least eleven people had to be rescued in Gulf Shores just this week.  Do a Google Search of “drowing on the Gulf Coast.”  You will see one story after another about kids and adults DYING in the water.

I just don’t understand why officials in beach towns don’t consider this a crisis.

I have a plea to those who are in positions of power in cities and towns off the Gulf of Mexico:  Please hire a public relations professional to do an educational campaign warning swimmers about the dangers of rip currents….what they are, how to spot them, and most importantly, how to escape them.  (For those communities already doing this, thank you!)

I don’t care how much money it takes.  Create videos.  Make public service announcements.  Post brochures at each and every beach house and condominium.   Hold workshops.  Inundate social media.

For more information on rip currents, check out the National Weather Service website.

2 thoughts on “Gulf Coast: We MUST do a better job teaching the public about deadly rip currents”